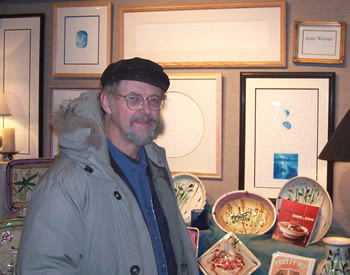 Arnie has not only exhibited continually for the past forty-five years as an artist in resident, he has also worked with many Alaska Native artists while employed by the Juneau School District's former Indian Studies program. He also operated a studio gallery for several years where many Alaskan artists gathered to practice their various forms. During this period, Arnie carved a yellow cedar totem pole which took three years to complete. The totem was lent to a local school to enhance their learning environment. Consequently, much of Arnie’s work shows an influence of the art forms indigenous to the native cultures of southeast Alaska. From Arnie’s many successes in the art realm, one would find it hard to believe that he cannot spit worth a damn. I am a mere freelance writer trying to assist Arnie out in his creative adventure. Thanks for taking the time to read this.
Sincerely, Mark Twain.